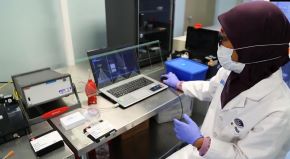 A group of researchers from Universiti Malaysia Perlis (UniMAP) has successfully invented a device to detect early stage cervical cancer. Nano Lab-On-Chip is an electrochemical device with Interdigitated Electrodes (IDE) which are highly sensitive and are able to detect changes in tissues, blood and saliva.

Principal researcher Dr. Nor Azizah Parmin from the Institute of Nano Electronic Engineering (INEE), UniMAP, explains that a sensor chip has been developed to combine voltammetric determination which will be able to quickly detect the cancer-causing Human Papillomavirus (HPV). Early detection is vital as the HPV can be treated, hence increasing the patient’s survival rate. It can also help in controlling the spread of the virus as early detection is crucial in ensuring its mortality. The device will be particularly useful in low and middle income countries that lack advanced technology and those whose patients face issues with access to relevant facilities due to logistical and geographical challenges.

According to Dr Azizah, the presence of the virus can be detected within a few minutes of taking the test. Apart from its use for cancer detection, Nano Lab-On-Chip can also be used for the purpose of environmental control during clinical tests, to check for antibiotic residue in water, to detect formaldehyde gas in wood and for related uses in the furniture industry. The device is cheaper than costs associated with conventional methods, has low fluid volume consumption and fast response time, is reusable and can directly measure real time molecular binding interaction.

Moving forward, the team is currently seeking industry partners or donors to work on enhancing the effectiveness of the sensor. Several agencies are being considered for partnership, including the Ministry of Health and Cancer Detection Centers.